In February 2013, I made an attempt to define Agile on my blog. I ended in a quite high-level definition of Agile:

“Agile is a collection of values and principles that encourage a certain type of behaviour: focus on value generation and collaboration.”

Just recently, I found an interesting blog by Rouan Wilsenach working with ThoughtWorks where he went one level deeper and explained “Four Attributes of an Agile Business”

1. Feedback – “This is what my customer wants.”

In my definition this relates to focus on value generation. Companies need to put the customer in the center of all their efforts. Rouan refers to an interesting list / toolbox on experience design. Only if organizations take this attribute serious they will finally be successful applying principles of agility.

In my definition this very much relates to values and principles supporting collaboration. Responsiveness comes only with co-location. In my experience, true collaboration over a distance can only be achieved within a trusted environment. People need to trust and respect each other to become a distributed team. If they don’t know each other of follow slightly different goals, it’s very likely to fail. So, the team spirit can be created most easily when forming inter-disciplinary teams which are located ideally in the same room. Rouan refers to Conway’s law (comparison of code structures with organizational patterns)

For me, this again a perfect example of value generation. Have a feature ready? Why not shipping it immediately? Great entry for principles like “Zero Bug Policy” or “Continuous Deployment”.

Furthermore, a responsive code base is a clean code base. People love to work on such a code base. It’s almost bug free, easy to read, simple to understand, documented. People are proud of what they’ve developed, created.

4. Continuous direction – “What do we do next?”

Again, this point goes as value generation. Why employing a bunch of people working hard on software development, building great products if there is no direction behind, no strategy?

Clearly one of the major tasks of managers in an agile environment is to set the strategy. Product people break this strategy down into epics and stories. So, what to do next? Pick the next story from the prioritized backlog.

So, for me Rouan picked some really great criteria and attributes for an agile business. They’re in line with my previous definition (which I like) and take it to a less abstract level.

Recently, my teamlead agile methods pointed me to an interesting corelation. After a discussion we concluded with a really mind-boggling observation. A settled organization facing change will increase productivity when reducing staff headcount – in other words: “Reducing staff leads to higher productivity”.

In our case we ended with this curve – impressively proving Brooks’s law. 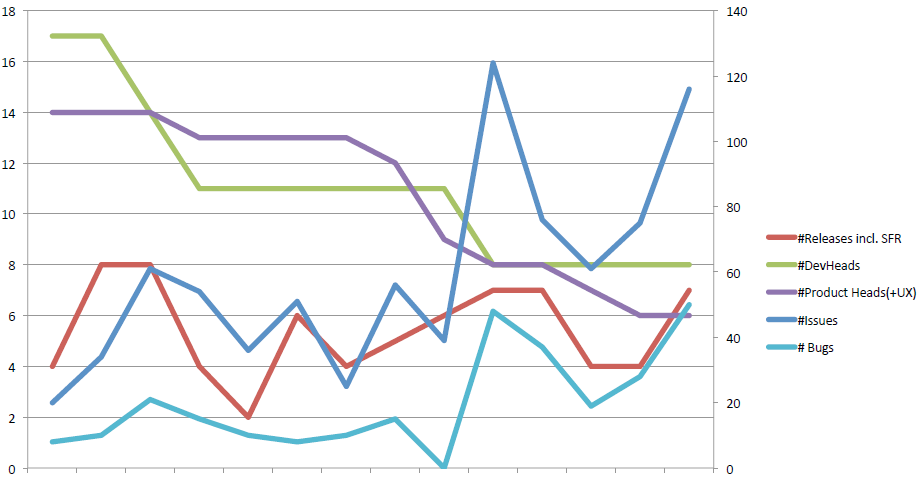 The graph shows a period from June 2013 (left) to July 2014 (right) and focuses only on one of our products at the time.

Red shows the amount of releases done in the period.The curve is trending towards a stable, flat curve.

Blue shows the amount of tickets closed and turquoise the amount of bugs closed. The two curves are decreasing trending towards a way higher plateau.

What happened? In June 2013 time frame we had a whole architecture team and quite some software developers organized in three teams working on our product. Around this point in time uncertainty hit the organization due to rumors of to-be-expected acquisition of our whole company. Uncertainty translates often to people leaving the organization. This can clearly be seen in the middle of the graphic. Surprisingly, the curves associated to work results don’t decline – as one would expect – but decrease even. So, productivity of the remaining staff increased! The most right date in the graph is July 2014 and reflects an organization which has one product team and one support team left. The architecture team disappeared completely, the team is ways lighter equipped with people.

What might we learn? Brooks’ law indicates that adding people to a project doesn’t automatically make the overall project finish faster. It might even end in a longer project run time. We’ve seen that removing people might result in better productivity. We think the fact of removing whole teams dedicated to special topics (in our case: the architecture team) helped to increase productivity in two ways. First, the responsibility of architecture decisions was pushed back into the teams and dead-lock situations where person A waits for a decision from person B just disappeared. Second, the time needed to communicate, agree and disagree simply vanished. Decisions had to be taken and nobody needed to be asked.

Is this a general pattern? I personally think this effect does only appear for a certain period of time. The drawback of such leaner organizations is obviously the lack of work on technical debt and architecture drawbacks. People in such situation focus on the obvious and postpone work on maintenance tasks for later. For me, it is definitely an observation I’d like to share with you. Perhaps you have similar experience? If so, please let me know.

Is there really a relation between the number of staff members and the productivity? Where is the limit? How can one push the limit?

The Clean Code Developer Initiative (CCDI) proposes a grade based system with color coding. It borrows concepts from game design by introducing a level concept. Entry level is marked with black and levels up via red, orange, yellow, green, blue to white.

For each level there are principles and practices listed which a software developer – or a whole department – should follow to get to the next level. 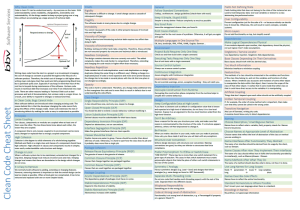 There is a nice poster available by “unclassified software development“. It’s even possible to print it out in A0 format – huge! 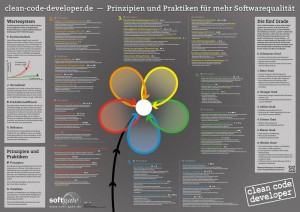 The whole level of a developer can be shown through wristbands. Allow them to be proud on their achievements! 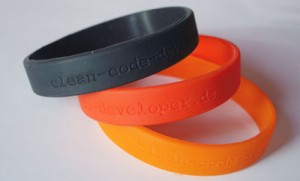 I personally haven’t tried the effort to introduce the principles of Clean Code into a software development department – but it looks like it’s a feasible effort. Accompanied by trainings and some team events, it should be possible to appeal to the developer’s honor – and improve your software quality standards.